Our good friends at Jalopnik’s sister site Truck Yeah have posted a very cool story about a vintage Ford Bronco running in the 2018 NORRA Mexican 1000.

This video provides a glimpse into the grit and drive it takes to win the insane 1300+ mile off-road race from Ensenada to Cabo San Lucas in Baja California, Mexico.

For anyone that has had the opportunity to experience Laguna Seca in person knows how challenging of a track it is to drive so it is no wonder this video is getting lots of traction online.  Posted recently, by our friends over at Jalopnik, the video is from this past weekend’s BMW CCA Club Racing Oktoberfest event at the Northern California track. It was shot from behind the wheel of an E46 M3 race car driven by the talented driver and coach Anthony Magagnoli of DriveFasterNow.com.

Turn up the volume and watch in awe as Anthony drives his M3 from last to first in just three laps, despite a failing ABS system and a very loud sound that later turned out to be the exhaust mid-pipe falling off the header.  Bravo Anthony! Bravo!

We have to thank the gang over at Jalopnik for finding this one.  Not sure whether to love or hate the guy so I will let you decide but it’s unique nonetheless. I never would have thought skeet shooting and Porsche 911 Targa would be in the same sentence but alas it is here.

With every passing day this VW scandal seems to be getting bigger so now seemed like a good time as any to take a closer look. 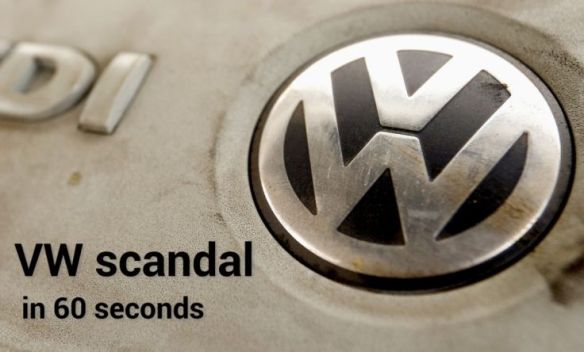 And Jalopnik has gone ahead and done us a solid with this article that explains how the whole mess started with VW attempting to cost cut.  I’m no litigation expert but after reading this it appears that things may still get a lot worse before they get better.  It truly is a big f’ing mess that will likely take a few years to sort out.  I do feel sorry for the thousands of workers around the world and all the secondary industry folks who had nothing to do with this but will be severely affected.  I sincerely hope VW puts its best men and women on the case and is able to come out of this a better company in the future.

We wanted to share a very unique story we came across on Jalopnik. A proud Dad to be from Soddy-Daisy, Tennessee came up with a totally cool way of sharing the news of his baby gender reveal. We always appreciate a guy who incorporates cars into important family milestones!

As an owner of an import performance tuning business, George (the Dad) of Custom Concept Motorsports came up with the idea to fit his wife Coir’s turbo Toyota Supra with coloured smoke tires and do one massive burnout for friends and family. Who knew they even made these things but apparently they do.  He had the speciality tires shipped to his shop from his friends at East Coast Customs all the way in Brisbane, Australia. The colour would be blue if they were having a boy and red/pink if it was a girl. The results speak for themselves in the video below. George can do a serious burnout too!

Many of you likely saw the video Pepsi Max created last year that went on to become a huge viral hit. We are talking about this one that showed a disguised Jeff Gordon (champion NASCAR driver) taking a local dealership salesman on the wildest ride of his life. That video was supposedly captured on a hidden camera but actually ended up being debunked as a fraudulent video by Travis Okulski, a writer for Gawker Media’s Jalopnik blog.

A year has now passed since the first video and Pepsi MAX and Jeff Gordon apparently had something to prove so they have created a follow-up Jeff Gordon 2.0 video.   By all accounts this new video is for real and destined to become another massive viral hit as it’s already at over 13 million views.

Although Travis is getting some serious online coverage within the mainstream media it must be slightly humbling since the world can now watch him scream like a little girl in the video.