Sold in over 140 markets around the world, the 2013 Chevrolet Trax is a smaller sized, five seat CUV/SUV. Powered by a 1.4L turbocharged engine paired to a FWD drivetrain or intelligent AWD system the Trax is well suited for both city and country terrain. Our tester came with the AWD system, an absolutely fantastic feature to have during the biggest snowstorm of the season here in Southern Ontario.

The Trax provides drivers with a unique combination of nimble, smaller sized CUV designed for the urban reality along with a hearty, adventurous core for when the going gets tough. During our test week, its smallish size made life easy for parking in various tight spots throughout the city.

The 1.4L turbocharged engine was quite peppy in both city and highway situations and provided a stellar level of overall power.

One key interior feature making the Trax come to life was its premium Bose stereo with amplifier, a must have with SiriusXM Satellite Radio™.  Having recently reviewed several other comparable vehicles, the stereo was quite exceptional for its overall price range. 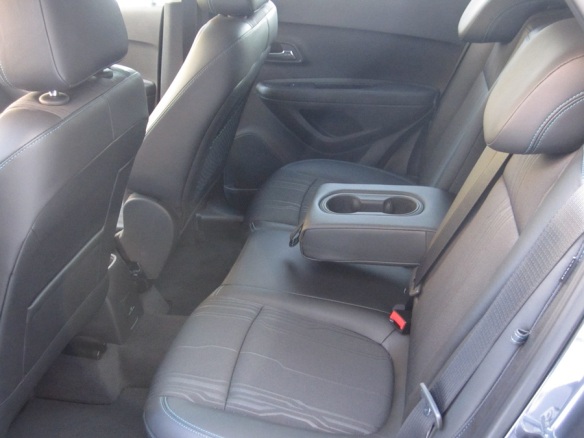 The Trax provides a generous amount of interior and storage space as a result of its flexible design and roomy seats. With its 60/40 flip-and-fold rear seat and fold-flat front passenger seat the Trax is totally up for any challenge from drivers who travel with lots of gear. With the rear seats upright, cargo space is 530 litres and with the rear seats folded down it provides a spacious 1,371 L  of cargo space*.  Along with ample cargo space, the Trax provides a varied range of storage including; several cup holders, door and seat pockets and several hidden compartments.

*Based on GM Canada’s vehicle information 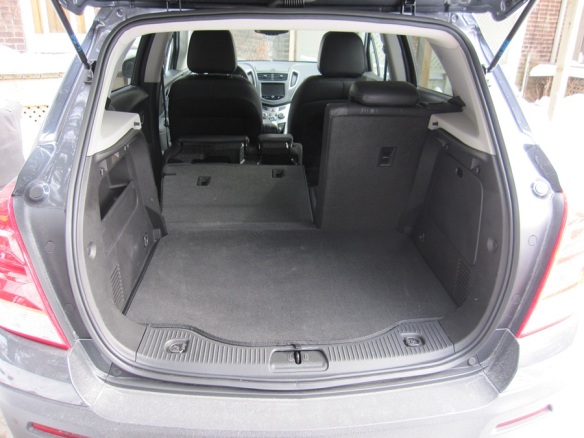 Our 2013 Chevrolet Trax review vehicle came in the 2LT trim package which includes the following features:

One thing we did dislike which was similar to some other GM models we have recently reviewed is the fact there was no armrest for the front passenger which is a real bummer on a long road trip.

Another interesting point for Canadians is the fact that the Trax is it is not sold in the United States. Apparently GM’s decision is based on American buyers tending to prefer larger vehicles and the availability in the US of the similar sized Buick Encore model.

The key competitors to the Chevrolet Trax in the smaller CUV/SUV segment are the Hyundai Tucson, Kia Soul, Nissan Juke and Suzuki SX-4. All of these competitors offer similar trim levels and sticker prices resulting in the segment being ultra competitive.  Time will tell who comes out as the sales champ but the good news for GM now is its latest Chevrolet product can hold its own among the competition. The Chevrolet Trax is a solid vehicle providing great overall value and should be on all new car buyers’ lists looking in this segment.