The team over at Motor Trend’s Dirt Every Day, builds the coolest 4×4 trucks ever driven in the bush.  On a recent episode they have outdone themselves once again with an insane 1979 Ford Bronco which has been modified to house a Dillon Aero’s M134D Minigun in the back. Seriously, what is more bad ass than a “Redneck Bronco” with a gatling gun that can shoot 3-4,000 rounds per minute. Be sure to skip to 17:28 to check out the minigun in action.

The first week back after the holidays is always tough but this week’s extreme cold has not helped shake the winter blues. However, have no fear since our good friends at Dodge have out done themselves with a newly created 22 minute documentary titled “Viper: DNA of a Supercar.  The new online video showcases how the Dodge Viper is created like no other sports car – with a relentless attention to detail originality and handcraftmanship.

The film can be viewed at driveSRT.com/2015/viper/documentary.  After watching this video, I can guarantee you will want to order one of these 645 horsepower fire-breathing dragons.  And we are always ready to give the Motor City a shout out, so how cool is it that the Viper is built in Detroit?

We are especially looking forward to seeing what the manufacturers have up their sleeves next week at Detroit’s North American International Auto Show.

King of comedy and legendary car collector Jay Leno gets up close and personal with this review of the new 2015 Corvette Z06 convertible.  After watching this video it sure makes me want to head down to my local GM dealer and put my order in. The whole clip is worth watching but make sure you check out the 20:35 mark when the Popo makes an appearance…..

Having reviewed the 2014 version of the Dodge Ram 1500 we were very excited to get behind the wheel of this 2015 version of Ram’s award-winning truck.  And, this time around we were going to see if all the media hype for the 3.0L V6 EcoDiesel is warranted.  Ironically, over the last few months we have seen an incredible drop in fuel prices so as of our test week in December gas prices in Canada were at their lowest level in four to five years and diesel fuel was actually priced at a premium in comparison.

Upon getting the keys to the new tester I was pleasantly surprised to see how good the truck looked in its “Western Brown” exterior colour.

Anyone familiar with the luxury standard of today’s full-sized crew cab trucks will not be surprised by the level of detail in the Ram’s cabin – it is comparable to that of a luxury car with its rich leather bucket seats and high-end interior materials.   Some of our favourites include the back-up camera (crucial for parking in tight underground garages) and the nine speaker Alpine stereo system with SiriusXM Satelite radio. Other key features especially useful in the Canadian winter include heated second row seats, dual zone climate control and a heated steering wheel.  However, one feature we did not have, but was in the 2014 tester, was the air suspension system which provides drivers with the ability to raise the frame of the truck enabling more travel for off-road use. This feature also lowers the truck for better fuel efficiency and makes it easier to get in and out. For our purposes in the city this is not a feature we would leverage on a regular basis, but it is cool nonetheless.

Our tester came equipped with Chrysler’s award winning UConnect multimedia and connectivity package. It’s the most user-friendly setup in any pickup truck we have tested to date, combining an 8.4-inch center touchscreen with a configurable gauge display. UConnect’s touchscreen and steering-wheel controls gives the driver instant access to all the communication and interior features available in the cabin. 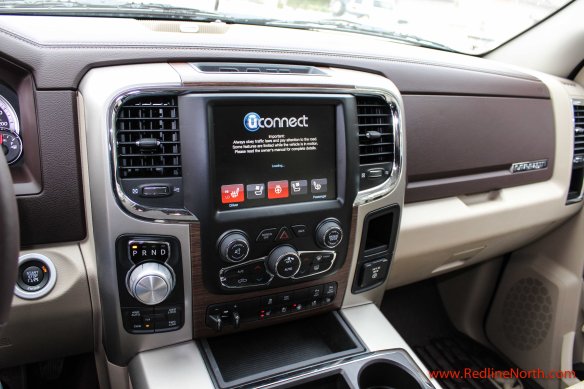 As Dodge’s third highest trim level, the Laramie Crew Cab 4X4 model comes in at a starting price of $40,595 CDN MSRP.  However, our tester model came with a base price of $53,695 but was equipped with a range of optional features pushing the actual “total price as tested” to $64,535. The biggest ticket item within all the options is the $4,600 for the EcoDiesel V6.  That is a significant chunk of cash but this EcoDiesel engine is game changing and was named one of Ward’s 10 Best Engines for 2014.

During our week-long test where we used the truck predominantly as a city errand chaser, with one trip to cottage country, the truck got an average of 10.4L per 100 KM which works out to 23 MPG.  This is truly remarkable fuel efficiency for an almost 6,000 lb (2,722 kg) full size truck especially considering the majority of miles were in the city.  In fact, the 3.0L EcoDiesel V6 is the most efficient engine available today in its class.  See official press release. 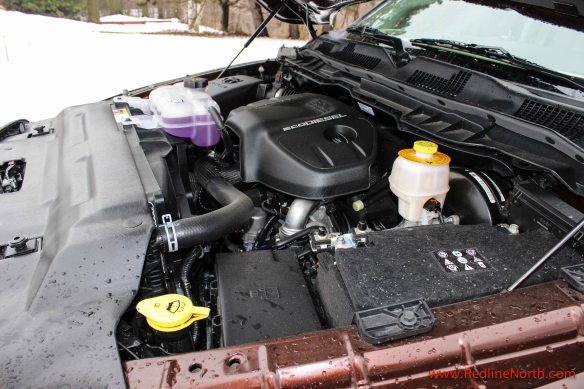 The 3.0L V6 EcoDiesel is a very innovative engine built from a block of compacted graphite iron with aluminum twin-cam heads that put out (240 horsepower and 420 pounds of torque) giving the engine loads of torque for towing (9,200-pound towing capacity).  Realistically, it does not have the same off-the-line speed as the HEMI V8 but who needs that? Since it provides a decent 0 to 60 time of about eight seconds (approx 1 second slower than the Hemi) which is very admirable for a full size pick-up that literally sips diesel compared to its gas-fired brethren.

The only feature our Ram was missing that would be useful is running boards since getting into the truck is a bit tough without them especially for shorter folks.  The running boards also provide some added mud and snow coverage for the driver and passengers upon entry and exit.

Since the Dodge Ram 1500 with its EcoDiesel V6 is the only diesel half-ton pickup currently available in North America there are no direct competitors. However, the key gasoline competitors to the Ram 1500 are the Ford F-150, Chevrolet Silverado, GMC Sierra, Nissan Titan and the Toyota Tundra.

I know Christmas has come and gone but if you are still in the need of a full size truck with superb fuel efficiency make sure you check out a Ram dealer near you!