Volvo has always been a leader in auto safety but this is one of their coolest inventions to date.  Earlier this week, Volvo debuted their newest child safety seat concept which is a fully inflatable device designed to make what’s normally a clunky and heavy seat both lighter and more portable. 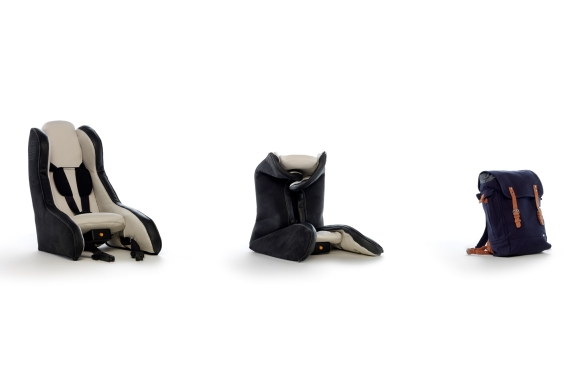 Designed for parents on the go, this new prototype transforms from a stylish-looking backpack into a rear-facing car seat in less than a minute. You can pump it in the car as the seat comes with its own pump or for those tech savvy folks it’s Bluetooth-enabled so you could pump it remotely. The seat is made with a fabric that can sustain high internal pressure, originally developed by the military as part of an effort to create an inflatable airplane, which is now used by the boating industry. Bravo Volvo!

Check out this seemingly unbelievable stunt performed by Jean-Claude Van Damme for Volvo.  The stunt was filmed at an airport in Spain.  Not bad for the 53 year old martial arts actor!  Kudos to the drivers of the trucks as well.  Quite a feat.

News this week that Volvo will be bringing its Plug-In Hybrid Electric Diesel V60 to the New York Auto Show next week as it is one of the finalists for the 2013 Green Car of the Year Awards.  The V60 is the world’s first production diesel plug-in hybrid. The diesel engine paired with the electric motor and battery offering 50 kilometers of pure electric range will provide a combined fuel economy of 130 MPG. Of course being an electric there will be instant power off the line and the V60 will reportedly do 0-60 mph in 6.1 seconds. In addition, the diesel engine will provide that much more range compared to gasoline.  No definitive answer as to whether the diesel version of the V60 PHEV will be coming to North America (Source Autoblog Canada).

Volkswagen also recently announced that it will be launching a pure electric version of its up! car. The Volkswagen e-up! will use the new Combined Charging System which will use a single plug for charging at Level 2 and Level 3. Unfortunately, the e-up! won’t be coming to North America at this point, however, other electric models from Volkswagen are expected to make it over to this side of the Atlantic including the e-Golf. Unlike the V60 the acceleration performance of the e-up! will not be as pronounced and will reportedly reach 0-60 mph in 14 seconds.  This is relatively slow by North American standards, however, it will travel 93 miles on a single charge which is very respectable as far as electric vehicles go.