In the continuation of our favourite James Bond cars, Part 2 looks at a couple of Aston Martins and provides an overview of all the cars Bond has used throughout the film franchise. 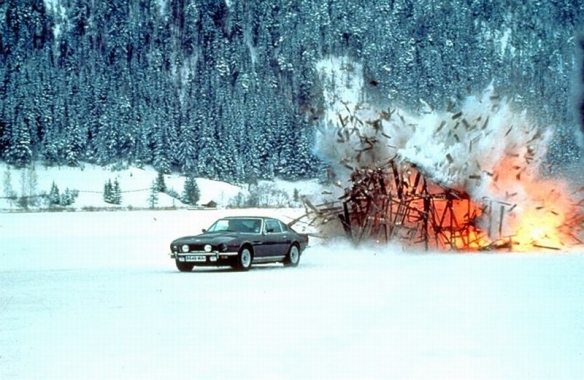 Timothy Dalton drove the Aston Martin V8 Volante as James Bond in the 1987 film The Living Daylights.  There are actually two different versions of the V8 used in this film. In the beginning of the film Bond is driving the V8 Volante, a convertible, while later in the movie during the main car chase (see below) it has a hard top.  The car used to film these scenes was actually a non-Volante V8 saloon.

Nonetheless, who can forget the cool features of this car.  This included laser beams built into the front hub caps that can cut a car in half and front missile launchers that locked on to a target by using the old school temperature sliders.  Of course, the most memorable feature of this car is the outrigger skis and studded tires that appear at the touch of a button.  These allowed Bond to jump over his enemy’s with the help of the on board jet booster!

The Aston Martin DBS was featured in not one, but two Bond Films – Casino Royale (2006) and Quantum of Solace (2008).  While the DBS didn’t have as many of the gadgets that the Q branch outfitted previous Bond vehicles in the past, it made our list for shear style and performance as can be seen the opening sequence of Quantum of Solace (skip to 52 seconds for the start of the car chase).

Aston Martin cars are featured a number of times in our list, and with good reason, James Bond has driven an Aston Martin in the series more times than any other car. The DB5 is also rumored to making an appearance in the upcoming Bond movie Skyfall, due to be released this fall.

Check out this great infographic from the folks at http://www.carinsurance.org that outlines the cars James Bond has used over the years.  The list of vehicles by brand at the bottom isn’t exhaustive, however, it does a great job showing how the Bond vehicles have evolved over the years.

As mentioned, the next installment of the James Bond film franchise is Skyfall due to be released this fall. If you want to get a sneak peak at the action (and the cars) check out the official trailer below.