The following is a video of Jay Leno talking to Bob Lutz (former vice chairman of GM) about a new electrified pick up truck that is about to enter the market manufactured by Via Motors.

Bob Lutz was the one of the main proponents of the Chevy Volt during his tenure at GM. He is now a board member at Via Motors, a new company that is focusing producing ‘range extended’, also called plug-in hybrid electric vehicles (PHEVs).  These are vehicles that run on electricity, but also have a back up gasoline engine.

What makes Via Motors unique in the EV market is their production (or more accurately conversion) to a PHEV of a full size pickup truck based on the Chevy Silverado platform called VTrux. 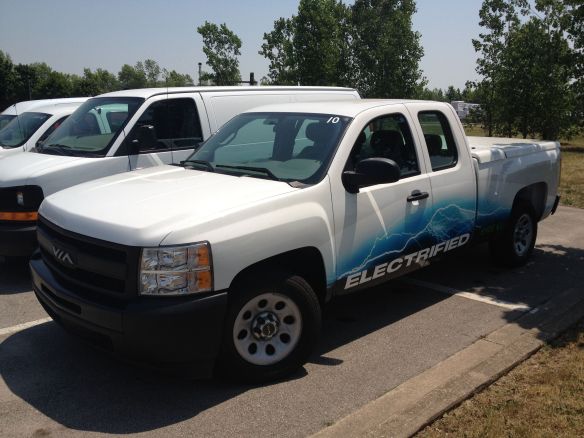 They also offer a full size SUV (based on the Suburban)…

To date the vast majority of electric vehicles entering the global market have been modestly sized vehicles. The full size offerings by Via Motors could be a game changer for those who would like to own an electric vehicle, but want more size and space than what is currently available.

In addition, the Via Motors pickup comes with an optional on-board inverter that can be used in place of a generator to power the workplace or provide emergency power.  For contractors, or those who use their pickups in remote locations and require a generator this may be an ideal solution.

The pickup truck will get 40 miles (64 km) on a single charge and an additional 300 miles (482 km) on the gasoline engine.  This will likely provide enough range for the vast majority of the population.

The anticipated MSRP of the vTrux pickup isn’t exactly cheap at $79,999 USD. However,  in many jurisdictions the vehicle would likely qualify for government incentives.

Fleet deliveries have started and consumer deliveries are expected in 2013.