Living in Toronto’s east end, space is a premium so driving a full size pick-up truck is not exactly ideal. However, having recently spent a week testing the 2014 Ram 1500 Laramie Crew Cab 4×4 I have to stay it’s a marvelous machine.  With its eight-speed automatic transmission, backup camera, air suspension and smallish five-foot-seven inch box it was surprisingly maneuverable in the tight confines of Canada’s biggest city. 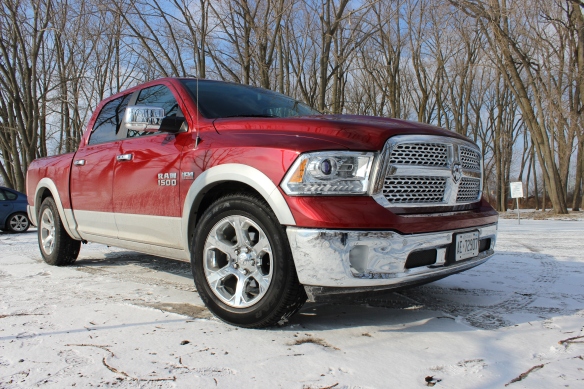 Having been named Motor Trend magazine’s Truck of the Year five times in the last 20 years the Ram brings a stellar pedigree to the table.  With victories in 1994, 2003, 2010 and back-to-back wins in 2013 and 2014, Chrysler’s Ram continues to have success with its winning platform.

In 2011, the Chrysler Group dropped the Dodge Ram model name, re-branding its line of trucks under the shorter Ram brand.  This new branding came with an amazing marketing campaign focused on the infamous “Code of the West” theme narrated by Hollywood icon Sam Elliott.  The hyper-masculine tone of these ads show the competition as being left in the proverbial dust with Elliott’s voice-over saying the infamous tag line, “Guts, Glory, RAM.” Here’s the original ad that set the creative campaign off. 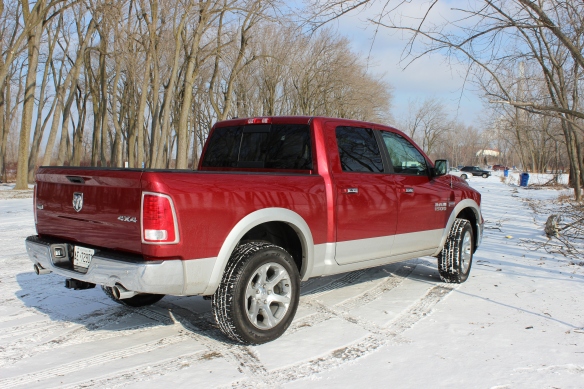 The Laramie Crew Cab 4X4 model is the third highest trim level coming in at a starting price of $38,895 CDN  MSRP.  However, our demo model came equipped with a range of additional options pushing the “as tested” price to $59,985. But before you say anything about this being significantly more than the advertised price just hold on since this Ram came with everything you could ever want in a truck.

Our tester came paired with the 5.7L V8 HEMI (395 horsepower and 407 pound-feet) and new eight-speed automatic transmission. The power-train incorporates both variable valve timing (VVT) and a cylinder shut-off system making it quite energy-efficient overall. However, don’t fret, Ram has not gone all soft on you – the HEMI provides tons of muscular power and 0-60 mph times of less than 7 seconds.  All this HEMI power is harnessed through chrome exhaust pipes providing a strong but subtle throaty, V8 exhaust note. 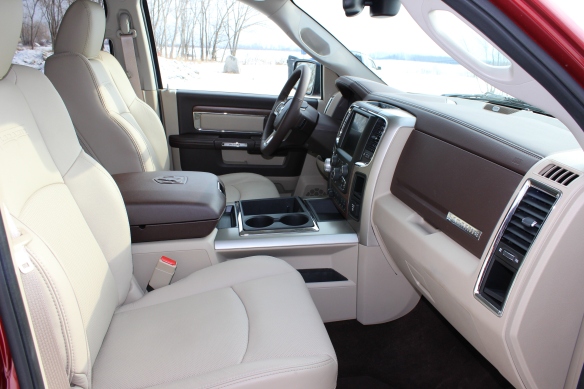 The cabin of the Ram is comparable to the look and feel of any of today’s luxury cars or trucks with its rich leather bucket seats and high-end interior materials.  Along with the 8.4″ Uconnect Touchscreen with back up camera, 9 speaker amp and subwoofer stereo system, this truck has it all. Some other features especially useful in winter include heated second row seats, dual zone climate control and a heated steering wheel. 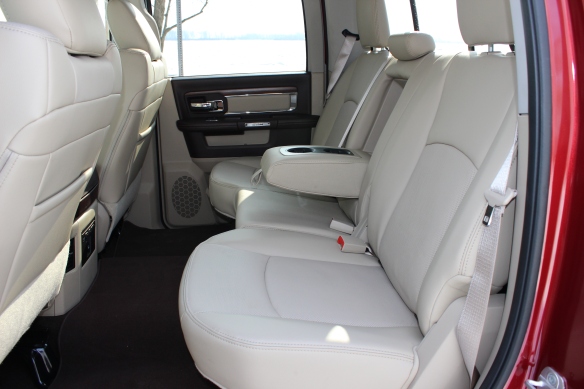 Having chauffeured around family and friends there were many compliments about the roominess and comfort of the Ram’s back seats.  Whether it’s people or groceries, the Ram provides tons of room with its crew cab model. 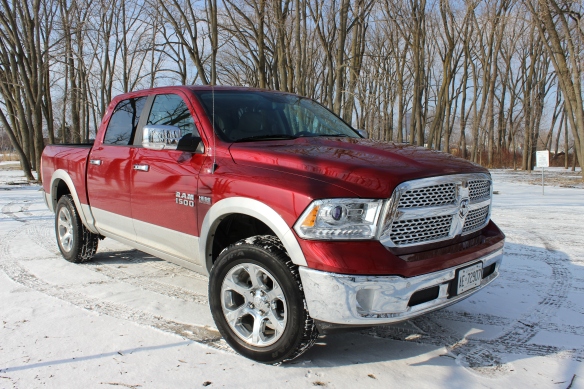 Ram Laramie with air suspension set to Off Road 2

In spite of providing all the creature comforts associated with high-end vehicles, the Ram does not compromise on its truck characteristics.  The image above illustrates the increased wheel travel available using the air suspension system which provides drivers with the ability to raise the frame of the truck enabling more travel for off-road use. The air suspension system provides a built-in lift-kit at the push of a button which is a dream come true for the off-road enthusiast who does not want to suffer the consequences in ride quality and performance of a lifted suspension.  Land Rover has used this technology on their models for years, so way to go Chrysler!

There is one other significant feature which the Ram possessed, it’s called the wife quotient.  I have written about this before in past reviews and its utmost importance at the end of the day, since without a high number, the usual result means the vehicle does not stay in the driveway. To my wife’s surprise, she loved travelling around in the Ram over the week, she thought it was the most comfortable vehicle she’s experienced in my life as an auto blogger.  She also loved the superior ride height and wide range of luxurious interior features.  If my needs were different and I required a truck, the only missing element for a perfect score would be the optional running boards.

With its rugged good looks, stellar performance and keen sense of efficiency the Ram provides consumers with an amazing opportunity to buy a truck that can do it all.

Key competitors to the Ram 1500 are the Chevrolet Silverado, GMC Sierra, Nissan Titan, Ford F-150 and the Toyota Tundra.