Well the old saying everything is bigger in Texas sure comes to life here.The Texas Mile has grown rapidly since the inaugural event in October 2003. Participants now come from all over the United States, Canada and Mexico to test themselves and their machines on the fastest and most challenging one mile track in the world. They achieve their top speed in one mile and shut down in a 1/2-Mile. This bi-annual Motorsports Festival is created for the performance enthusiast – Welcoming Motorcycles, Performance Street Cars, Race Cars and Land Speed Racers.

One such machine is the 2000 Chevy Camaro owned by Kelly Bise, driven by Josh Ledford and built by Houston, Texas based Late Model Racecraft. 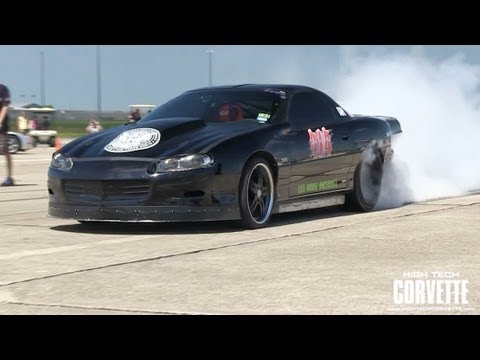 See the Camaro in action at the Texas Mile in March 2012.

Specs are as follows: