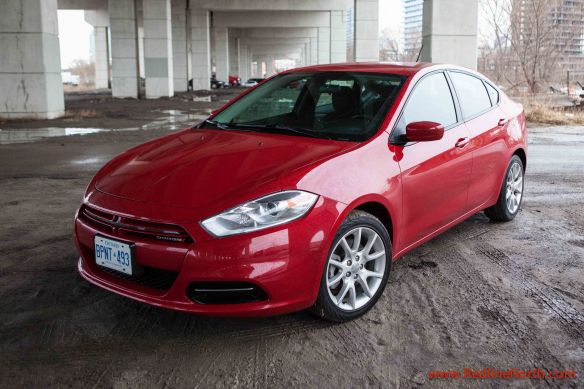 Starting life as a full size vehicle in 1960, the Dodge Dart moved to a mid-size car in 1962 and finally became a “compact” in 1963 until 1976 when it was discontinued in the United States.  In 2013, Chrysler resurrected the Dart into what we see today using a modified Alfa Romeo Giulietta platform (source).  The new Dodge Dart made its debut at Detroit’s North American International Auto Show back in January 2012. The development and launch of the Dart is a significant milestone for Chrysler as it has been eight years since their last compact sedan the Dodge Neon was available to North American consumers.

RedlineNorth recently had an opportunity to review the SXT model, which sits just above the base SE model, and provides a number of features, including a 8.4 inch touch screen. 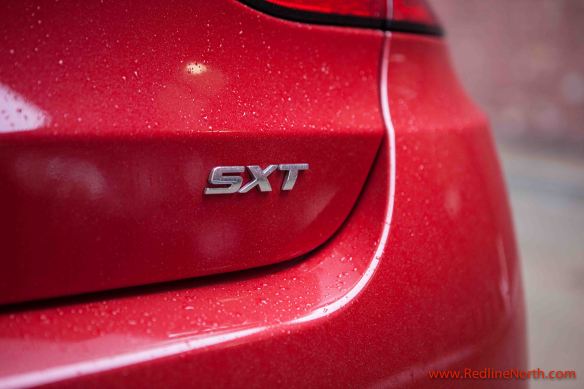 The first thing you notice about the Dodge Dart is the aggressive exterior styling. The split cross hairs at the nose of the vehicle show that it’s unmistakably a Dodge. The sweeping projector headlights, lower grill and positioning of the rear tail lights across the length of the body all add to its sporty look. In addition, our tester came in a Redline Red paint colour of which we were particularly partial to. 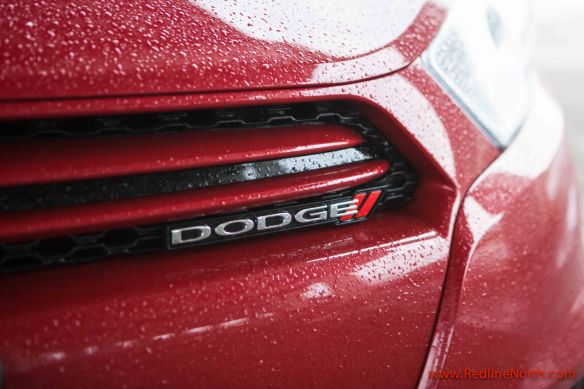 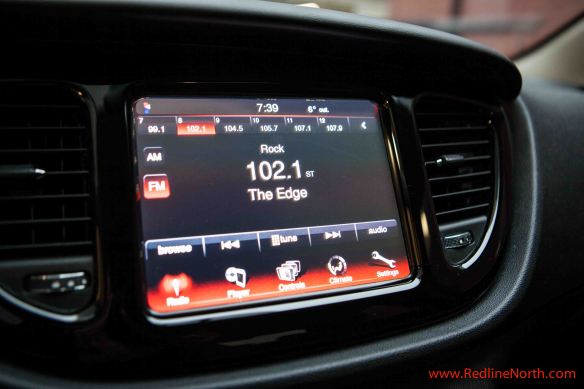 Upon sitting in the driver seat of the Dart SXT you immediately notice the 8.4 inch touch screen display system, which Dodge calls the Uconnect 8.4. It’s simply massive and makes good use of all the extra real estate as on-screen buttons were spaced apart and easy to select.  Unlike other smaller screens which are forced to located everything in close making it more difficult to select the right button. Another pleasant feature is the vast amount of customizing options available through the touch screen menu including everything from headlight on/off as well as doors & lock timing to Auto-On Comfort & Remote Start. For the traditional audiophiles, the Dodge Dart does includes a CD player which is tucked away in the arm rest.  While many have migrated to downloadable music it’s good to see Dodge recognizing that many folks still use compact discs and have provided that option.

Another feature within the interior of the Dart is the 12 volt power supply which illuminates at night and provides light to the in-dash storage compartment, making it easier to find items in the compartment without having to turn on the interior lights.

Rear legroom was plentiful and a rear centre arm rest with pass thru is provided, both features provide some extra comfort for those longer journeys. The cargo area in the trunk was cavernous providing loads of room for gear.  The combination between rear cargo and interior passenger space places the Dart right up there in terms of available interior volume in its class.

The  2.0L I4 engine in the Dart SXT produces 160 horse power and 148 lbs of torque. Acceleration was generally good with the automatic transmission, although the 6 speed manual with the optional 1.4 L turbo engine (and 184 lbs of torque) would likely suit drivers looking for more power.  The Dart will do 0-60 mph in 7.6 to 7.9 second

The Dodge Dart provides great value for someone looking for a compact sedan with all the functionality one would expect from a 2013 model.  However, it also comes with an added bonus not available in all compact models and that is, “personality”.  Whether it’s your daily commute or a road trip with family the Dart is always poised to please.