I realize this is a tad morbid but it’s just so over the top we thought it deserved a post.  As published in Gawker earlier this week, Ohio native Billy Standley had his dream funeral that included being buried on his beloved Harley Davidson motorcycle.  Apparently, Bill first came up with the idea 18 years ago and with the help of his family, worked on the project on and off for years. The fabricated casket was made out of plexiglass, with wood and steel rods reinforcing its bottom. 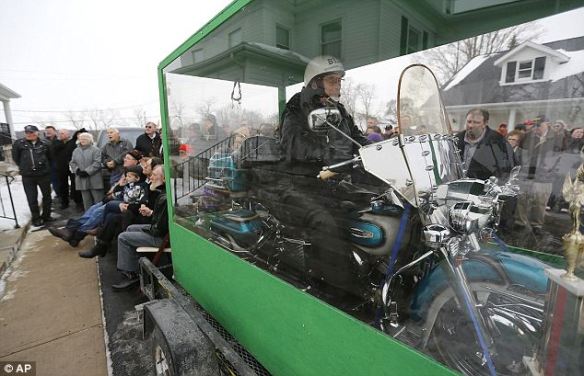 Who’s says you can’t bring it with you?

Since the beginning of time there has always been something about embalming bodies that humans have been so curious about.  I have actually seen in person both China’s Mao Zedong and Vietnam’s Uncle Ho Chi Minh in their permanent embalmed states and it’ just so strange.  Russia’s Stalin is also embalmed in Moscow so it must be a Communist thing…..Nevertheless, there was a similar story a few years ago on Autoblog about a shooting victim in Puerto Rico who was embalmed in a very lifelike position atop his Repsol branded Honda CBR600 F4 motorcycle.

Hey, to each his own right?