As promised we have some coverage from last week’s Honda Indy “Fan Friday”.

It’s always a pleasure to see the “Great American” Dodge Viper in action on a North American racetrack.

Cadillac in the pits

True to its premium brand, Cadillac brought an amazing level of resources to Toronto from its newly developed race cars to even better team food in the pits. I guess it really does pay to be the top of the line brand of the world’s largest auto manufacturer. 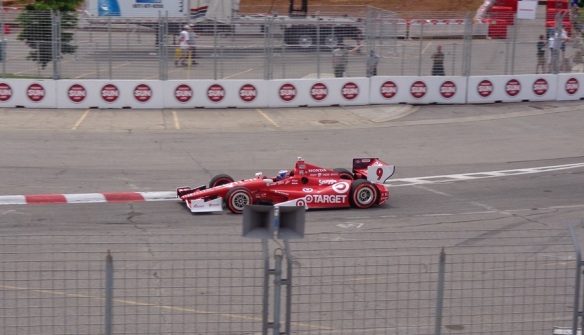 Scott Dixon – Winner of both races

Scott Dixon the “Kiwi” from New Zealand driving for the Target Chip Ganassi Racing team won both races to secure the $100,000 dollar prize offered to the racer who won the whole race weekend. The victory is the 32nd of his career, making him the winningest active driver in the Izod Indycar series and the seventh most successful driver in American open-wheel racing history.

Unfortunately, our hometown boy James Hinchcliffe finished eighth the first day and 21st the second, after his throttle got stuck in the pit lane before the start, resulting in him getting stuck at the back for the whole race.

Cadillac testing the track out

A new race series called Stadium Super Trucks recently launched by former NASCAR driver Robby Gordon also ran over the Indy weekend. The series consists of racing style monster trucks equipped with off road tires and massive suspensions tearing around while also hitting BMX style ramps. With a field of star drivers behind the wheels including Canada’s own Paul Tracy, the new series is quickly becoming a fan favourite throughout North America. Although Paul’s day was not so good with him hitting the wall hard as seen in this video it was great to see him driving fast on Toronto’s downtown street circuit once again.

Make sure you block out next year’s Honda Indy Toronto dates so you can be a part of this racing enthusiast experience.