BMW North America, a US Olympic Team partner, recently announced that the U.S. Men’s Bobsled Team will race a prototype BMW two-man bobsled.  The sled was developed in cooperation between the auto manufacturer and the USA Bobsled & Skeleton Federation. BMW provided its design and engineering expertise and “…paired intelligent lightweight materials, such as carbon fiber, with optimized aerodynamics to design the new sled. The result is a significantly lighter body shell with a low and centralized center of gravity.” (Source: BMW)

In a sport where winners and losers are determined by tenths of a second, it will be interesting to see how the newly designed sled will perform in competition.  Two prototype sleds have been developed, with the first being tested in competition this weekend at the FIBT World Cup in Igls, Austria.  The second will remain in development for the remainder of the season in preparation for the 2014 winter Olympics in Sochi, Russia.

The results of yesterday’s competition show that perhaps Team USA needs to spend some extra time getting use to the new sled design.  The team only took possession of the unit the day before competition and unfortunately Steven Holcomb (Park City, Utah) and Curt Tomasevicz (Shelby, Neb.) who raced with the new sled came in 14th place. 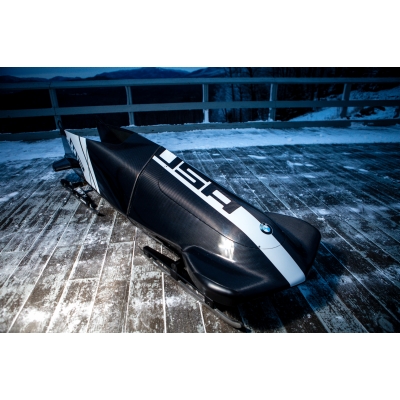 “Sometimes you have to take a big risk to prepare for the future,” Holcomb said.  “I wanted to race it, because we only get six training runs in St. Moritz.  I wanted the extra runs in the sled, because it’ll take a little time to figure it out.  I don’t know any sled project that comes out of the box and wins, so we knew we might have to lose before we can win.” (Source: Team USA)

It will be interesting to see over the coming year how the sled performs once Team USA gets a chance to become comfortable with the new design. Is this the start of new partnerships between the auto makers and national Olympic teams leveraging the former’s aerodynamic design experience? Likely not, but time will tell.