This past weekend, Team RedlineNorth headed to beautiful and tranquil Bancroft, Ontario, Canada to experience the sights and sounds of the annual Rally of the Tall Pines. As the official final stage in the Canadian Rally Championships, Rally of the Tall Pines is home to a very competitive atmosphere as race results are critical to winning the national championship.

Action from Rally of the Tall Pines

The Canadian Rally Championship is comprised of six events held nationwide in a season that extends from February to November. The series is presented by Subaru Canada, supported by Yokohama Tire Canada and officially sanctioned by the Canadian Association of Rallysport (CARS). The all-season motorsport sees drivers and their co-drivers take modified road cars to the limit as they achieve blistering speeds over closed-road courses that typically cover more than 150 kilometers of gravel, dirt or snow-covered roads.

Rallying is one of the most grueling and difficult of all the motorsports since it combines both driving ability and technical know how as teams must make repairs to the cars on the fly in between the various stages. To be successful, a team must have a skilled and fearless driver along with an experienced navigator who can read the maps and communicate instructions seamlessly to the driver. In addition, teams also need to have  talented mechanics and technical support staff to be able to repair the vehicles in order to continue through the multiple stages. Here is a glimpse of the action from the service area after the first stage on Saturday. 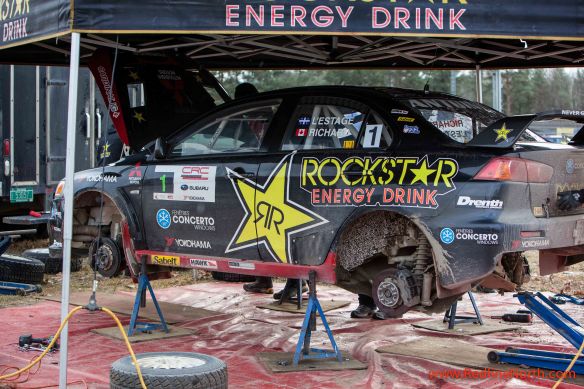 And this year did not disappoint fans once again, as it was another close race that saw Patrick Richard and Alan Ockwell’s Subaru edge out Antoine L’Estage and Nathalie Richard’s Mitsubishi for the victory. However, the championship was not on the line since Antoine L’Estage and Nathalie Richard had officially been crowned the 2012 Canadian Rally Champions with their victory at the 2012 Pacific Forest Rally in BC in mid October. Nevertheless, the event was well attended by both local and regional fans along with rally enthusiasts from all over who come to Bancroft to experience Canadian rally racing in its finest form.

Be sure to keep reading the blog as we will be publishing a follow up story soon.

See here for more information on the Rally of the Tall Pines and to check out the final results.