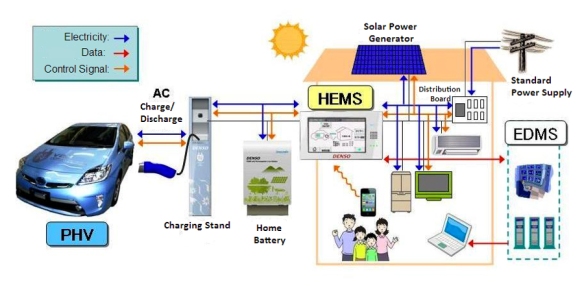 How a vehicle to home system works

One aspect of electric vehicle adoption that isn’t always covered in the press is energy security.  This relates to reduced dependence on foreign oil, but also includes mobile power.  For example, in the aftermath of last year’s earthquake in Japan, or the 2003 blackout that hit the North Eastern United States and Eastern Canada imagine having thousands of electric vehicles that could feed power back into people’s homes providing crucial energy for heating, communications equipment or other necessary equipment.

While the electric vehicles on road today don’t have that capability yet, they soon could. Major automobile manufacturers are aware of this potential and are starting to take steps to make this happen.

Toyota Motor Corporation announced recently they have developed a vehicle to home system (V2H) for mutual sharing of electricity between electric vehicles (including plug-in hybrids and full battery electric vehicles) and buildings.  A fully charged plug-in Prius with a full tank of gasoline could theoretically supply power for an average Japanese home for four days (approximately 10 kWh).

The V2H system will be tested in Japan in approximately ten households at the end of 2012 as part of the Toyota City Project. Nissan is also working on a similar system for their electric vehicle, the Nissan Leaf. While it may be a number of years before a system such as this would be commercially available, however, this is potentially one more benefit to the widespread adoption of electric vehicles.